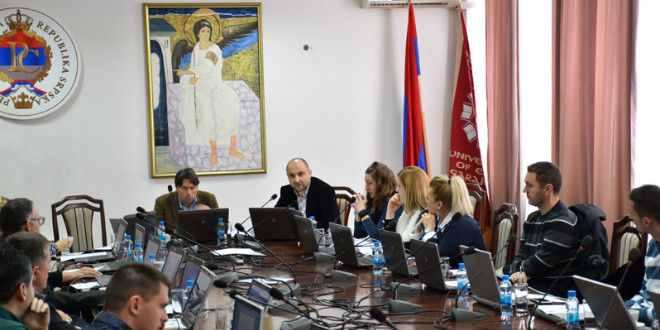 The second meeting of the Quality Assurance Committee was held at the Rectorate of the University of East Sarajevo on Tuesday, December 5th, 2017.

Members of the Committee discussed the Self-Evaluation and Quality Assessment Report for 2016 and the Student Survey Report for the summer semester of academic year 2016/17.

The Chairman of the Committee, Vice-Rector for International Cooperation and Quality Assurance prof. dr Dejan Bokonjić, informed the members about the preparations for the upcoming re-accreditation process of the University and the accreditation of study programs. Considering that the accreditation of study programs has to be conducted for the first time and taking into account the fact that our University is the first in Bosnia and Herzegovina to enter this process, for this accreditation cycle the best study programs at the University will be selected. In order to prepare better for this process, Vice-rector Bokonjić announced that training for vice-deans, secretaries and quality assurance coordinators from the faculties and academies of the University would be held at the Faculty of Economics in the coming week.

A proposal of the Public Communications Strategy of the University and the supplement to the e-NIR card of scientific workers were presented at the meeting. Also, an employer survey, which would be conducted electronically through an online survey questionnaire include about 650 employers from the eastern part of Republic of Srpska was presented too. With that activity, the University of East Sarajevo would receive feedback on the employers’ satisfaction with the skills and competences the University graduates. The results of the survey would provide clear guidance regarding possible change of the teaching and learning process at the University, and in what direction it should be further developed in the future.

The activities and planned projects of the University Computer Center (UCC) and necessary amendments and changes to the existing study rules in the first and second cycle of studies were discussed within the discussion of current issues.