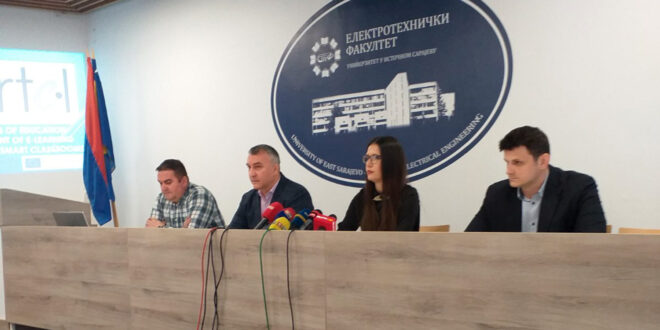 Erasmus Plus projects promoted at the Faculty of Electrical Engineering

The Faculty of Electrical Engineering of the University of East Sarajevo has promoted international “Erasmus Plus” projects, three of which will be realized at this Faculty.

The Vice-rector for Science, Research and Development at the University Prof. Dr. Jelena Krunic emphasized that the position of the University of East Sarajevo largely depended on its international reputation and that was the reason why the internationalization was one of the strategic goals.

These programs aim to improve all levels of education, link non-formal and informal education, link education with the labor market and mobility of teachers and associates. From this year, a new cycle of “Erasmus Plus” programs will start, which will last until 2027, and its budget will be around 26 billion euros.

B&H participates in seven of 18 approved in the Western Balkans, and the University of East Sarajevo participates in four of them, which we are proud of. One of these projects is `Smartl`, and it is a project of strengthening and developing a platform for e-learning and development of smart classrooms, with the aim of increasing the number of students.

Share
Previous The International Greek Language Day at the Faculty of Philosophy
Next Minister Rajcevic: The Faculty of Transport and Traffic Engineering is an example of the synergy of the Government with the academic community
Designed by UCCES
© 1992-2022. University of East Sarajevo. All Rights reserved.