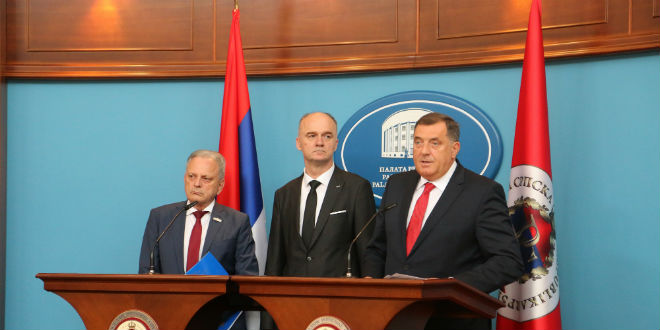 Meeting of the President of Republic of Srpska and Rectors of Public Universities: Employment for 81 assistants

President Dodik said that the best student candidates for the competition would be employed, pointing out that for these purposes 300,000 KM were planned, amounting total of 2,2 million KM for the assistances’ salaries in the next year.

“We have embarked on the realization of the employment policy covering best students providing them with the opportunity to continue to engage in scientific and educational work,” emphasized the President of Srpska, inviting students studying at prestigious universities abroad to apply for competition, stressing that their abilities and ratings would be appreciated.

He pointed out that the rectors of both public universities had been doing their job well, and that other issues in the field of higher education were discussed at meeting as well.

The Rector of the University of East Sarajevo Prof. Dr Stevo Pašalić thanked the President, the Government and the National Assembly, stressing that the representatives of the University were very grateful for the given assistance for the procedure of recruiting new assistants.

“The University is stable financially and organizationally, while the staff structure is improving and just a few months ago we announced a competition for the recruitment of 27 top students, generation students. This procedure is in the final stages and I think that by the beginning of the academic year, they will be included in the teaching process and also teachers will be engaged as well, “said Rector Pašalić at the press conference held after the meeting with the President.

Rector Pašalić noted that it was planned to receive a significant number of the best students next year, stressing that it was the best way to develop the University, and to keep young and educated people in Republic of Srpska.

“I am glad that we work on personnel procedures. We want to keep the best, for which there is a great fight in the world. We planned to receive about 40 of the best in the coming years and see what are our needs. This is the best way to keep them in the country they need to improve and develop,” said rector Pašalić.

Rector of the University of Banja Luka Prof. Dr. Radoslav Gajanin said that the competition procedures for receiving new assistants are ongoing and welcomed the decision to engage the best students for further work at universities.

“In the next year we will try to get the best at the university. Instead of visiting teachers, classes should be taken over by home staff. This will be good thing for the system as well”, said Rector Gajanin.

Share
Previous University Internationalization Strategy 2018-2023
Next Representatives of the Faculty of Medicine participated in the 5th European Congress of Immunologists in Amsterdam
Designed by UCCES
© 1992-2021. University of East Sarajevo. All Rights reserved.