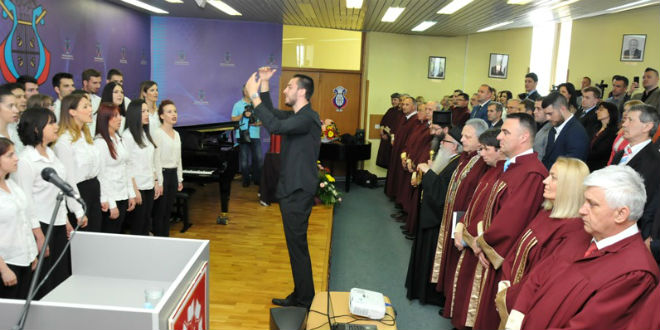 Official promotion of 26 PhDs of the University of East Sarajevo

An official promotion of 26 PhDs who defended their doctoral thesis during the previous year was held.

The Rector of the University of East Sarajevo, Prof. Dr. Stevo Pašalić awarded the diplomas to the PhD candidates, congratulated them on their success, saying that promoting their PhDs, the University promoted the science and successes it achieved for 26 years of existence and work.

“Your trip was not easy! We are proud that the University has received around thirty new doctors of science and we hope that you will continue to transfer your knowledge to younger colleagues. My message to all PhD students, as well as all students who will be rewarded as students of the generation, is to stay in this country because they are something most valuable, and this country will do everything to give them the opportunity to apply their knowledge in certain institutions “, said Rector Pasalic.

He said that the University achieved significant results during 26 years of its work: 18,140 students graduated, 412 doctors of science, 860 magistars and 720 masters promoted.

The official promotion at the Music Academy amphitheater was attended by His Grace Bishop Dabrobosanski Mr. Hrizostom, Vice-rectors of the University of East Sarajevo, faculty and academy Deans, professors, university staff, as well as family members and friends of promoted PhD candidates.

Share
Previous Students of the Department of Russian Studies visited the University in Voronezh
Next Students of the Faculty of Traffic Engineering Doboj participated in an international conference in Macedonia
Designed by UCCES
© 1992-2022. University of East Sarajevo. All Rights reserved.