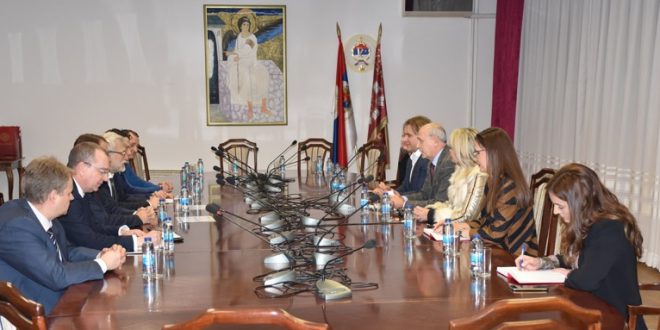 A respected Russian delegation visited the University of East Sarajevo

The Rector of the University of East Sarajevo Prof. Dr. Milan Kulic hosted an important delegation from Russia on Thursday, January 16, 2020 led by the Vice President of the Russian Academy of Sciences and a Member of the Presidency of the Russian Historical Society Nikolai Makarov.

Rector Kulic expressed his honor and satisfaction that the distinguished Russian delegation, visiting Bosnia and Herzegovina for the first time, visited the University of East Sarajevo, to discuss the intensification of successful cooperation that the University continuously pursues with Russian universities and institutions in various scientific and cultural fields .

The University management informed the delegation about the specifics of the UES, as well as about the active agreements it signed with universities in Europe and the world, 10 of which with Russian universities, especially in the fields of arts, linguistics and agriculture.

The guests from Russia were informed that the students of the Music Academy were staying at the Music Academy “Gnesin” in Moscow, and that there was a Department for Russian Language at the Faculty of Philosophy, as well as a Center for Russian Studies, making the University of East Sarajevo unique in Bosnia and Herzegovina. The Rector’s team also emphasized a success of the students of the Department of Russian Language who showed an exceptional level of mastering Russian, taking first and third places in the competition in Russian language skills.

Special thanks are also extended to the representatives of the Russian Embassy in B&H, as well as to the Russian Humanitarian Mission based in Belgrade, who are continuously assisting through various projects and activities.