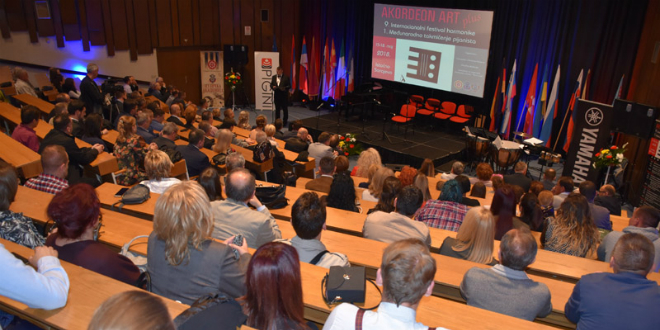 The traditional festival of the Music Academy of the University of East Sarajevo “Akordeon art plus” was officially opened last night in front of a large audience in the amphitheater “Prof. Dr. Veljko Vuletic ” in East Sarajevo. This year, festival consists of the 9th International Festival of Accordion and the 1st International Piano Competition.

On behalf of the University, the Rector of the University of East Sarajevo, Prof. Dr. Stevo Pasalic greeted participants, guests and audience, expressing the belief that this year’s most significant manifestation of the Music Academy would confirm the traditional quality.

The Dean of Music Academy of the University of East Sarajevo, Professor Dražan Kosorić, MA, emphasized that the organizers were very pleased with the number of participants having more than 240 competitive applications, several ensembles and three orchestras, and around 45 prominent members of the professional jury (about 350 direct participants).

The Vice-rector for Student Affairs, Culture, Art and Sports, Professor Sandra Ivanović, MA,  emphasized that “Akordeon art plus” became an identity card of the Music Academy and the brand of the City of East Sarajevo, and that she was extremely pleased and proud that this year’s festival gathered an impressive number of competitors and the most important names in the field of pedagogy and performance on accordion and piano.

Share
Previous “Teachership 2018” gathered more than 500 students from the country and the region
Next The first Master thesis in the Chinese language was successfully defended at the Faculty of Philosophy
Designed by UCCES
© 1992-2021. University of East Sarajevo. All Rights reserved.