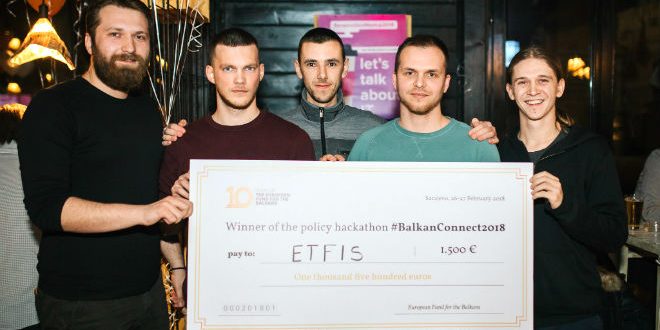 The team of “EFIS” of the Faculty of Electrical Engineering, University of East Sarajevo winner of the competition “Policy Hackathon #BalkanConnect2018”

The EFIS team participated with the “Garbage Collector” project on environmental protection, which consists of hardware, web and android applications used by utility companies and citizens to have an insight into container availability and timely discharge. The second part of the system referred to the exchange of usable waste of larger dimensions that citizens often place next to containers and thus pollute the environment.

The team of the Faculty of Electrical Engineering of the University of East Sarajevo will participate in the next round of competitions that will be held on 17th April, 2018  in Belgrade.

Share
Previous Certificates for students of lifelong learning courses of the project “CULTURWB”
Next A lecture on contemporary university teaching
Designed by UCCES
© 1992-2021. University of East Sarajevo. All Rights reserved.